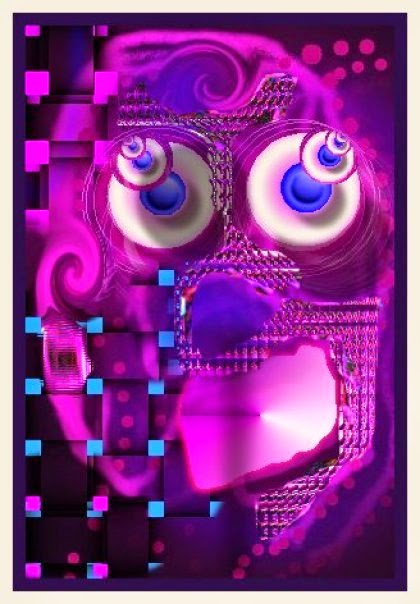 Bio
Denny E. Marshall has had art and poetry published, some recently. He does have a website with previously published works. The web address is www.dennymarshall.com. He also has a “Guest Artist Page” on his dot net site if any artist would like to submit. (See Guidelines)

Posted by Stephen Jarrell Williams at 4:41 PM No comments:

Three days gone and revived,
made up to look like Scarlett J.
as seen through a broken lens,
made-up like a Sex Pistol on a
bad hair day then slathered in tar,
give E and forced into a large, airless,
confining room, smoke thick and jungle
wet, Techno-Rave music at ear drum
bursting loud, searching for a note
beyond high C.  Surrounded by indoor
electric lady land laser lights,
disembodied hands and arms,
wave lengths in the air dangling
from nowhere like in a death match
of marionettes, closing in walls
pulsing, animal hot, amplified,
seem to suggest: Listen to My Heart
Beat on drugs.  Anything is possible
now, even the birth of a new life form,
an alien invasion.
Posted by Stephen Jarrell Williams at 4:22 PM No comments:

John Pursch lives in Tucson, Arizona. His work has been nominated for Best of the Net and has appeared in many literary journals. A collection of his poetry, Intunesia, is available at http://www.lulu.com/spotlight/whiteskybooks. Check out his experimental lit-rap video at https://www.youtube.com/watch?v=l33aUs7obVc. He’s @johnpursch on Twitter and john.pursch on Facebook.
Posted by Stephen Jarrell Williams at 4:20 PM No comments:

"Just my luck." You're thinking,
"To run out of fuel in East Jesus.
Where the hell am I going to find
gas in a God foresaken place like
this?" You dig out your red and
yellow gas tank from amid the ruin
of the trunk and start walking down
the unlighted back road to nowhere,
pass the sign that says: WELCOME
TO EAST JESUS  NO PEDDLERS
ALLOWED  VIOLATORS WILL BE
SHOT ON SIGHT  NO EXCEPTIONS
Start thinking this running out of fuel
business could be worse than you thought
but you don't see how and then you are
in the 42nd Street subway station still
holding that gas can and now you're
sweating bullets thinking they are going
to assume you are a terrorist so naturally
you think, "It's time to hit some bricks."
But you can't.  All the access routes are
blocked by these Homeland Security dudes
like airport luggage inspectors waving
their wands at you like they're going to
attack, then you notice they aren't airport
security at all but the dead aliens from
Area 51 dressed in uniforms and holding
these laser weapon things like a Mars Attack!
movie and you're all set to freak when this
waitress at the Roswell Eat Here Diner is
handing you a menu and you're ordering
the House Special Burger that turns out to
be this green thing on a bun slathered in
lumpy cheese which isn't doing much for your
appetite but the waitress notices and says,
"Don't fret, Son, food coloring makes
that burger green and the lumps in the cheese
are real moon rocks." Which, somehow makes
it all okay and after a few bites and no apparent
seizures a thought occurs and you ask,
"Hey, Honey, do you guys sell gas?"
And the waitress winks and says,
"Depends, what kind do you want?"
That's when you notice all the Helium balloons
being filled and how the room is filled with
Hindenberg replica blimps in all colors,
sizes and functionality reminding you that
this isn't New Mexico anymore but New Jersey
and the radio newsman describing the events
outside is saying, "Oh the humanity!" as the blimp
burns out of control, most on board dead in
seconds and you remember the gas can you
began with and decide, "Now is not the time to
bring up rapid accelerator facilitators.  Hell, I'd
rather walk anyway." Which seemed like such a
logical, such a sensible and prudent course to
take at the time, I mean, really who could have
known otherwise?

After years of serious drinking,
stints in drunk tanks, begging
quarters from tourists and church
goers, sleeping it off in unlocked
rooms, broken-into rectories, sheds,
dog houses large enough to accommodate
a man not too proud to curl up in dried
shit, after years of abuse, trying so hard
to die, waking up sober, a few fingers
short of a hand, receding gums no teeth
would adhere to, falling out hair a cheap
rug might cover, a dye job mask,
a permanent cast to his eyes, feeling so
strange to be alive and breathing trying
it out for size felt like a novelty act he’d
have to experiment with while working
out all the kinks, a process not without
drawbacks like coming back from the
dead with visions of altered states, foreign
places so strange his tales of woe sounded
like science fiction or fantasy thrillers
rather than a narration of the truth,
felt like the lyric verses he was composing
in a language he’d learned on the other side;
some say it sounded like a revelation,
others like gibberish and they were both right.
Posted by Stephen Jarrell Williams at 7:09 PM No comments: