Thank you to all the poets and artists and photographers for making UFO Gigolo so successful!  It is with great sadness we're closing her down.  Please send your poems that you have emailed in to another poetry site.  There are many great poetry sites out there.


Posted by Stephen Jarrell Williams at 12:02 AM No comments: 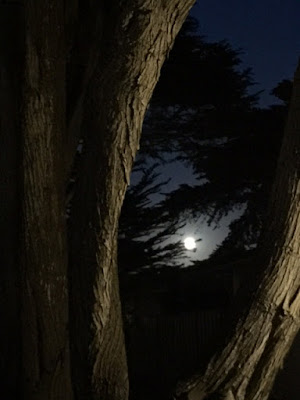 Jennifer Lagier and her three spoiled dogs live beside the Pacific Ocean where they entertain poets, a few select mad men and a small gopher snake.
Posted by Stephen Jarrell Williams at 12:38 AM No comments:

[For Robert and Kathleen Nolan]

Oh, to extinguish the seas,
and make the waves recede.
The nights between you both and me
are oceans that separate.

To meet at a nadir
between continents,
to traverse
dryness in endless leagues,
to descend
the fathoms now made shining canyons,
where all the former depths are rendered
newly whitening plains,
I would find you
smiling among inert shipwrecks.

All their rusting hulls would be
as iron strange oases,
now in an ironic desert —
the seabed under midday.
A warm new noon alights their wakes.
Intermittent citadels
of masts again in sun
would brightly tower over
their resurrected figureheads;
their mermaids’ opaque eyes would find
we three gladdened
among the once benighted bows.

There’d be an incongruity
between crustaceans now
slowed almost to stillness
in the blanching sun, while we …
we rushed to an embrace.
Our shouts would break
the silence of epochs.

Somewhere on a shore, this night,
beached upon an altar
of lunar-like nocturnal sands,

finally, face to face,
dessicated starfish
stare at their namesakes in heaven.

Posted by Stephen Jarrell Williams at 12:24 AM No comments:

A favorite game of the screaming insane
launch an arrow high into the night sky
run around in wonder, where it will strike.
Perhaps in the sand, or your right eye.

Tractor pull is on, rumbling the coffins
tilt a whirl spins, grasping for dear life
hide twixt the rides, young are smoking
pick your own poison, puff puff, cough.

Games shutting down, midnight is here.
dancing on the strip as the lights go low
parking lot empty, as the masks come off
swap out the booty at a corn dog stand.

The hideous and dark gather stolen souls,
stored in a dybbuk box; off to the next town.
The trucks roll the back roads, moving slow,
the UFO loaded to the dark side of the moon.

Ken Allan Dronsfield is a published poet and author originally from New Hampshire, now residing in Oklahoma. He loves thunderstorms, walking in the woods at night, and spending time with his cats Merlin and Willa. He is the co-editor of the poetry anthology titled, Moonlight Dreamers of Yellow Haze available at Amazon.com. His published work can be found in journals, magazines, reviews and blogs throughout the web including: Indiana Voice Journal, The Literary Hatchet Magazine, Belle Reve Journal, Peeking Cat Magazine, Dead Snakes, Bewildering Stories and many others.


Posted by Stephen Jarrell Williams at 12:04 AM No comments:

Extraterrestrial spider,
Invisible; they say.....
Spins a web of deception,
That is growing every day.
Possessing insatiable hunger,
A master of deceit,
It's web a snare for humans,
Who become a prey at its feet.
The web is becoming stronger,
Tightening every day,
And the spider is wiser than humans,
Determined to have its way.

Posted by Stephen Jarrell Williams at 12:18 AM No comments:

I.
Shshshttt... Listen to the sparrows
Knitting plans behind the wings
And ask yourself
If the words are enough
To build a city of gossips
Under the sparrow's songs...
II.
Come now, return from pain
That with courage you build it in days, and every day
While it tears down like sandy castles
In the nights
When you shed in tears
Freezes the hurricanes;
But enough already:
Even slavery is drunkenness!
III.
Spy a little on the silence
While is speaking
And tell me:
How many were killed by the despicable silence of hers
Defeating
When none of us bothered
To look for answers?
Meaning takes form only in subconscious.
IV.
A drop of liquor let's have today
Till the end
For the end of the two-facets
That don't know end
And let's sing together,
Sing with us
The sparrow's song...!
© Irsa Ruçi              (Translated by Silva Daci)

A man! *
Men will never fully understand
How weak they feel in front of love
How the strength of their pride are betrayed in that childlike
And the path of his heart, are easily lost
In purity of thoughts, through conscious exhaustions
Like the toddler who hides his lies in their smile.
Women will always think that they have one more sense
To feel that the light which comes from the manly chest
Is his unsaid word
Is a rocky silence
That breaks disturbed breaths of emotions,
In their eloquence appears absence, like the sight
In a mirror where the self is absent
And the reflection is the soul
Drowned in the ocean of deliriums that conquers the being.
They burn their wishes like cigarettes, with the grace of simplicity
And the future is asked in the fog
Wordless, lost in paths in solitude
Because a man gives love like his breath…
And the women put the devil in the bottle for that love
That afterwards know the angel that lies in his soul.
© Irsa Ruçi              (Translated by Silva Daci)
*(First published at Ashvamegh Magazine (Ashvamegh Indian Journal of English Literature), May Issue)

Immortality
Through tears we come in this world
...tears that smile to life!
We carry a bunch of them behind in that journey to eternity...
Silence is our only peaceful prayer
against time our silence is equal...

When opening our eyes
we can see how in dreams, they swing us
turning love in our motif
we close our eyes, leaving behind
The echo of our own words
permitting death to sing hymns for eternal life...

Truth is that one never dies,
only leaves... In a world with no words
his memory foreverly alive!

Irsa Ruçi is an Albanian Writer, Speechwriter and Lecturer. She was born in Tirana (Albania), in 1990. Her books of poetry include Trokas mbi ajër (poems and essays), 2008 and Pështjellim (poetry), 2010.

Among many awards, she has received the first prize in poetry, in competition "Anthology 2007", as the best poet in Albania.
Posted by Stephen Jarrell Williams at 12:04 AM No comments:

John Pursch lives in Tucson, Arizona. Twice nominated for Best of the Net, his work has appeared in many literary journals. A collection of his poetry, Intunesia, is available at http://www.lulu.com/spotlight/whiteskybooks. Check out his experimental lit-rap video at https://www.youtube.com/watch?v=l33aUs7obVc. He’s @johnpursch on Twitter and john.pursch on Facebook.

Posted by Stephen Jarrell Williams at 12:11 AM 38 comments: